Open the door to 112 W Walnut and find yourself enveloped by the enticing aroma of vanilla from Sweetwater Café & Bakery, but this building is much more than sugar and spice. No building on the Decatur Town Square has had a more diverse history. Prior to 1880 Absalom Bishop, “father of Decatur,” built a home on the site for his and his son-in-law, Edward Blythe’s families. The home was large and often protected early settlers from moonlight Comanche raids. 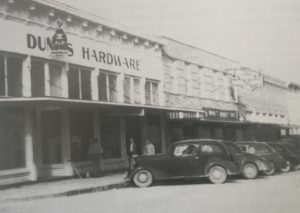 The family ran a mercantile store called Bishop & Blythe from 1859-1879 all while being instrumental in organizing the territory into a community, changing the name from Taylorsville to Decatur and making it the County seat. After the store went bankrupt in 1879, J.J. Lang purchased the lot in 1881 and erected a new stone structure. The first floor became a grocery store called the St Louis Store, and professional offices including the dental office of Dr. D.H. Payne were upstairs. Perhaps the most unusual occupant was announced in 1893 when the Decatur Ensor Institute for the treatment of liquor, morphine, cocaine, and tobacco and cigarette habits opened for business. The building burned in December of 1893. Lang’s daughter re-built and a billiards hall touted as “a pleasure resort for gentlemen” occupied the space in 1904. Through the early part of the 1900’s as the community grew and evolved the building’s occupants changed to meet new needs serving as a repair shop, millinery store, variety store and a dry goods store. 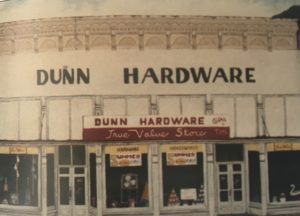 In 1933, at the height of the Depression, Dunn’s Hardware opened. Thomas J. Dunn and son, John Thomas Dunn, first leased their space later purchasing the building in 1940 from the Bellah family. World War II was a struggle for the business as Dunn’s son was in the Navy and all his salesmen left town. Dunn persevered, modernized the building, and added a new store front in the 1960’s. Despite all the hardships, Dunn’s Hardware had a remarkable 57 year run in this location. The hardware store closed in 1991 and then in 1993 the metal slip cover was removed to return the building to its current historical status. Carol Ann Carson purchased the property in 2004. Next time you are waiting for your pancakes, let your mind wander and try to imagine citizens from the early days of Decatur strolling through the doors of this historical building going about their daily business and picture a square so full of people you couldn’t stir them with a stick.