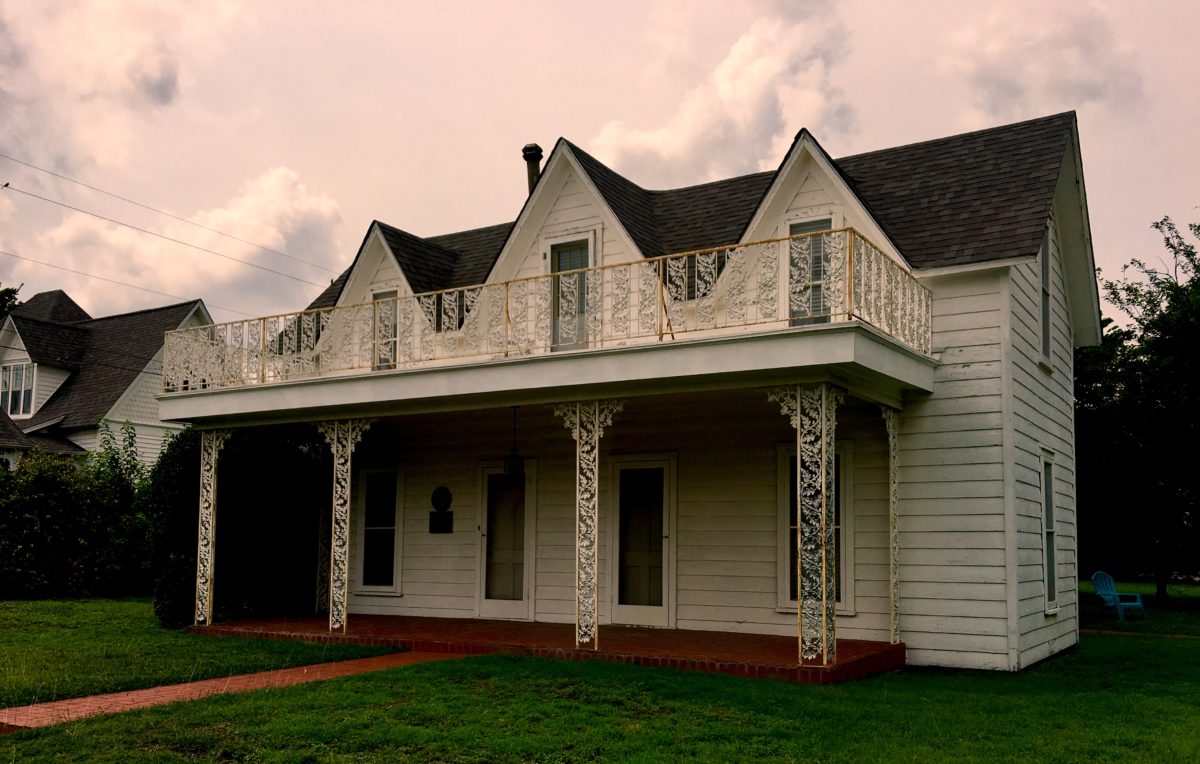 On a small, non-descript street just off the Decatur town square sits a little white house bearing a coveted historical marker paying homage to S.W. Tilghman. Who was Mr. Tilghman and what made him important to Decatur, Texas? 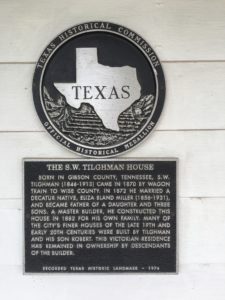 As Pioneers moved west, they made do with tools and materials indigenous to the area when building their homes. Log cabins and sod houses were the norms. By 1900 the typical American home was less than 1,000 square feet. While indoor plumbing and electricity were available, they were not common. Porches were a must for the hot Texas summers. Dog-trot houses were prevalent for their large breezeways in the center of the home. Americans, while borrowing from historical styles such as Greek and Roman, were at the same time fashioning a style that would become uniquely American with an emphasis on comfort. Most towns now had sawmills making gingerbread trim, columns and cornices available. Even simple frame houses made use of architectural elements. Neat and orderly homes portrayed a sign of progress and new wealth attracting newcomers to the community.  Rapid expansion was creating the need for housing in Decatur!

As far as it is known, S.W. Tilghman was the only carpenter inthe early days of Decatur. He was known for his quality workmanship hand carving all the woodwork in his homes. Tilghman was born in 1846 in Tennessee and arrived in Decatur like many settlers of this time by wagon train in 1870. Two years later he married a native of Decatur, Eliza Bland Miller. He purchased land from M.W. Shoemaker in 1882 for his family home. He built a story and a half farmhouse framed in oak with cypress weatherboarding. Floor joists were hand-hewn oak and installed with wooden pegs. All square nails were used in its construction. Lumber came by way of mule train from Jefferson, Texas. The railroad was still too expensive, and economics usually prevailed with the early settlers. The original estate, bordered entirely by a white picket fence, included the farmhouse, a stable and lot for horses and buggy, double outdoor toilets and a tank tower with servant’s room. The residence consisted of seven rooms, three large porches, two fireplaces, two parlors, a dining room and a kitchen. Tilghman incorporated elements from his native Tennessee such as dormered windows and large front porches. The home has remained, from the time of its construction to present, on the original lot thus qualifying it for historical recognition. No walls have been removed, rooms are still the same size, and ceilings are the same height despite additions of indoor bathrooms in the 1930’s and central heat and air in the 1950’s. A set of antique Dresden plates belonging to S.W. Tilghman was used for the inspiration for wallpaper and rugs during the period of remodeling. The home maintains some of the family’s original furniture.

Tilghman had several children who move away from the area, but his son, R.C. Tilghman (Bob) who was born in 1875 learned the skill of carpentry from his father and remained in Decatur to work in partnership with him. S.W. Tilghman passed away in 1913, but Bob continued to build houses until his death in 1948. As a tribute to the Tilghmans’ skill and the integrity, many of the homes they built are still standing.

In 1890 a two-story Victorian house was constructed at 301 South Hill for Judge Patterson who was a large landowner on the square and a much-honored citizen of Decatur. He served as District Judge for the 43rd District for 24 years. They also built a Victorian folk home located at 1005 N. Trinity for Dr. D.H. Payne who practiced dentistry on the square until his death around 1934. That same year they built homes for D.W. Frazer, furniture store owner and Tax Collector, at 300 E. Shoemaker,  and homes for Leon Starnes and R.H. Barney at 401 S. Miller and 302 S. Miller respectively.

In 1903 the Tilghmans began a two-story Victorian home at 305 E. Shoemaker for D.J. Penniger, owner of Penniger General Merchandise on the square.

1904 saw the completion of an Arts and Crafts home for wealthy banker and First National Bank board member, Tom Yarborough at 1004 E. Main.

Because of S.W. Tilghman’s master carpentry, we still have a small glimpse into the lives of the people who first madeDecatur into a thriving community. His homes stand as time capsules of a way of life that has disappeared for neither the tradesmen nor the materials are available today to recreate these one-of-a-kind abodes. We are grateful for the expertise and vision of our early settlers and feel reassured that the stories these homes hold will continue to be told to future generations.