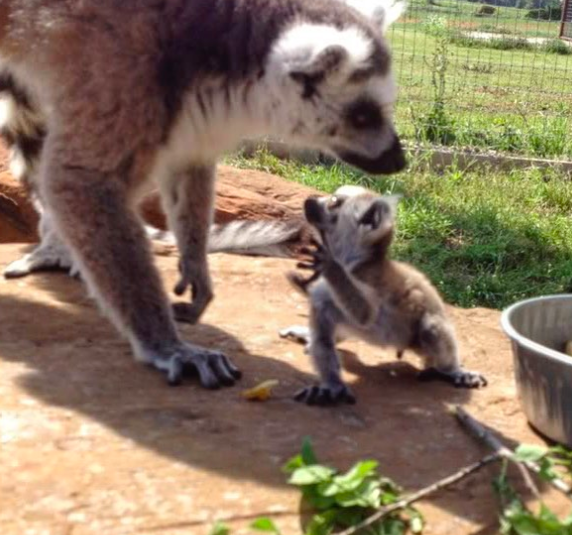 Without a doubt, it is a new season at the Center for Animal Research and Education in Bridgeport (C.A.R.E.). After experiencing several devastating deaths of beloved animals this past year, there is now much to celebrate – BABIES!! On a recent visit, a peek around a corner reveals a tiny four-month-old tiger. 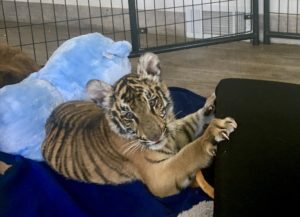 Baby Zara has recently found a forever home at C.A.R.E. Weighing only twenty-seven pounds, far smaller than typical for her age; this little one is fascinating to watch. Her big paws indicate how large she will one day be as she happily splashes water out of her pail. A nearby Clorox bottle with many small indentions proves how sharp her teeth are. She is spending time indoors while a green-stick fracture to her leg heals and what a set-up she has! At the time of our visit, she was watching Finding Nemo on her big screen TV. Finding a  type of bedding she cannot destroy is quite the feat.  She was already on her third bed of the day, but that one was holding up pretty well so far. She has completely destroyed others in a matter of seconds! Interestingly her enclosure is filled with stuffed animals that she loves on without ruining. She is genetically quite hyper and finds it hard to settle down.  Zara has been raised alone, but Heidi Krahn, director of the facility, thinks she might benefit from a friend and is actively looking for another tiger to fit the bill. This baby is lovingly watched over by caretakers that willingly stay all night with her. During our visit Bagheera the house cat came strolling through with no fear whatsoever only to show her great displeasure of the new resident. We also witnessed contented purrs during a bonding moment with Heidi’s son. She is not a pet, however. As soon as her injury heals, she will be outdoors in an enclosure.

Meanwhile, a fairytale is being played out in the lemur house. To understand how amazing this story is you have to understand how lemurs think. They are incredibly social primates that form a troop with an alpha female as the leader. The troop is very bonded with rules unique within their troop. Fast forward; a lady shows up with a three-month-old almost dead baby lemur weighing just 97 grams(approx. birth weight). Heidi was very hesitant to take the baby because a lemur raised by people is not a lemur. It does not know the rules. 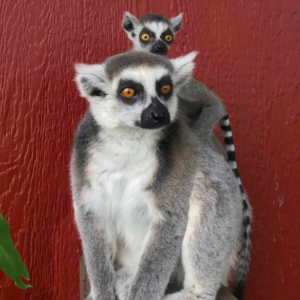 Knowing the little one would either die from malnutrition or be unaccepted and killed by the troop, she set about to save her. Little Momo was fed two drops of soy formula every thirty minutes around the clock eventually moving to a blended mixture of milk, cheerios, Activia yogurt, banana and aloe vera juice. She began to thrive, and slowly, slowly Heidi commenced to introduce the baby to the troop consisting of Rita, the alpha female, Mrs. Stewart, and Mort. The moment of truth was the scariest day Heidi had experienced. She knew the troop could very well kill little Momo, but luckily Rita’s motherly instincts were deep-seated. Momo jumped on Rita’s back, and she has been a part of the family ever since. As we rounded the corner to the lemur house, Heidi called out, “Rita show us your baby.” What happened next was nothing short of magical! Out dashed a lemur with an impossibly small baby clinging to her back. Momo now weighs 420 grams, but she is still so tiny. We watched in awe at the interaction and tricks of this baby, her lack of fear often leaving us nervous and even gasping! She has gone from near death to acrobat extraordinaire.  There are still hurdles to face. When she turns a year and a half to two years old, there could be problems, but for now, it is an unheard of happy ending. While an alpha female has been known to take a baby from within a troop, there has never been an instance of one accepting an unrelated baby from outside the troop as her own. The lemurs at C.A.R.E. are unusual to begin with because they love people and they love each other. Such happy news for some of the earth’s most endangered species. 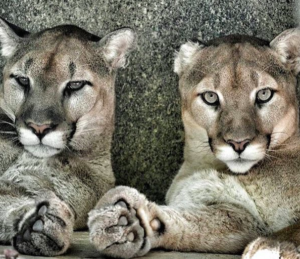 Making our way down the hill, we come upon a staked section in a serene, secluded area with incredible views. This will be the home for two mountain lions coming from the Dallas Zoo. A campaign has already begun to raise the money for what will be the most costly venture that C.A.R.E. has undertaken to date. The beautiful enclosure will feature a glass room for visitors to observe and eat as well as suites to spend the night while offering these two lucky mountain lions a fantastic habitat to call home.

Here is the fundraising page for their incredible new home: 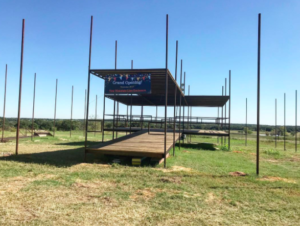 As Heidi ignores all road blocks and continues to work tirelessly to provide a meticulously maintained and loving environment for the beloved animals entrusted to her, we celebrate this new season with her and all those involved in making C.A.R.E. the remarkable facility that it is.