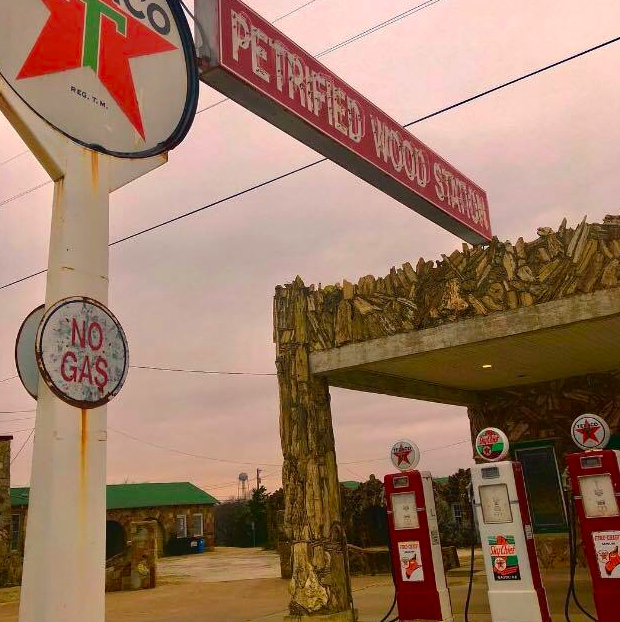 The Texas Tourist Camp and Petrified Wood Gas Station stand like relics from that by-gone era on the east side of Decatur, an old Chisholm trail town which used to be the site of the Decatur Baptist College (now, it’s the Dallas Baptist University). The complex consisted of a gas station, five cabins, and a café. Today, only the café serves its original purpose.
It actually began as a camp 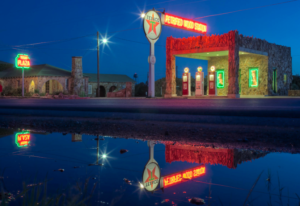 ground on the edge of town. In 1927, owner E.F. Boydston, realized that money could be made as people began travelling for leisure, so he added a gas station, and in 1929 opened the Texas Lunchroom for hungry road trippers. In the early 30’s, Boydston built cabins with garages to offer more comfortable settings. To REALLY spruce things up, his brother Nolan put petrified wood (quarried from around the area) on the exteriors in 1935. The tourist court became an attraction in its own right, and remained popular throughout the 30’s, 40’s, and 50’s for locals, travelers and college kids.

As typical North Texas history goes, Bonnie and Clyde supposedly stayed in one of the cabins for a few nights. Since the Texas Tourist Camp didn’t make guests sign a register, and the couple used the back roads into Dallas constantly, the claim may not be too far fetched. 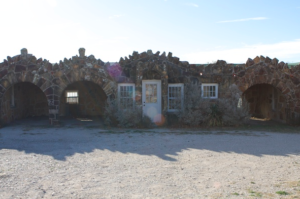 Sadly, the Texas Tourist Camp went the way of juke boxes and poodle skirts. As Interstates began bypassing whole towns, it slowly began its demise. First, the Texas Lunchroom closed in 1964… about ten years later, the cabins shut their doors for good. The gas station remained open until 1989.

In 1992, some enterprising souls bought and remodeled the Texas Lunchroom, renamed it the Texas Café, and now cook up hamburgers, chili, and apple pie. The Boydston living quarters are insurance offices, and the gas station serves as an office for the remaining family.