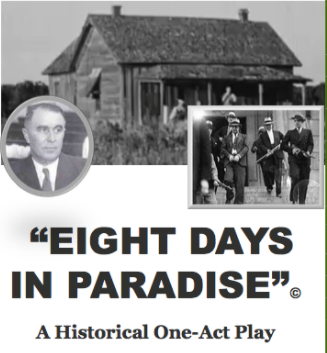 During the throes of the Great Depression, desperate times led to desperate, reckless activities. Texas became a hotbed for criminals. The most notorious being Bonnie and Clyde, but a bank robber was making quite a name for himself thanks to his ambitious wife. George and Kathryn Kelly were residing on Mulkey Street in Fort Worth at this time. George was known by his big-time nickname of “Machine Gun” Kelly. Kathryn, hoping to promote her husband’s status in the criminal world, encouraged him to plot a kidnapping.
On the evening of July 22, 1933, an innocent game of bridge among friends was suddenly interrupted. “Machine Gun” and his long time partner, Albert Bates, held up oil magnate Charles F. Urshel and friend Walter Jarrett with his famous machine gun. While they were only interested in Urshel, they ended up leaving with both men as their helpless wives looked on.
Charles F. Urshel was first married to Flored Slick, sister of Thomas Baker Slick, Sr., who discovered the vast Cushing Oil Field in Oklahoma earning him the title “King of the Wildcatters.” Slick died in 1930 and after Flored’s death Urshel married Slick’s widow, Berenice. Their combined fortunes made them one of the wealthiest couples in Oklahoma City. Urshel, in Kathryn Kelly’s mind, was their ticket to the big time.
Walter Jarrett was soon released, but Charles Urshel was taken to a remote farmhouse in Paradise, Texas where he was held blindfolded for nine days. He was forced to write his own ransom note for $200,000. His kidnappers had not counted on Urshel’s determination and keen memory. He memorized with vivid detail every aspect of the ordeal. He was able to recount the weather, patterns of plane flight, times, directions and voices even though he was blindfolded. He also made sure to leave fingerprints on every surface he could reach.
After the ransom was paid by a close business associate, Urshel was freed on a rainy night in Norman, Oklahoma with only cab fare in his pocket.
J. Edgar Hoover, hoping to improve the reputation of his agency, took a particular interest in the case. It would be the first time to put the new Lindbergh Laws into action. Due to pressure from Hoover and the incredible amount of detail Urshel was able to provide, FBI agents found the hideout in short order. The farm, being used as a safe house for bank robbers, was owned by Kelly’s in-laws, Robert “Boss” Shannon and wife, Ora. All told, the case would lead to twenty-one convictions including a life sentence for “Machine Gun” Kelly. When finally captured unarmed, he famously yelled, “Don’t shoot G-Men” thus coining a new nickname for FBI agents still in use today. The trial took place in a packed Federal courtroom and would be one of the first ever filmed. Hoping to put the ordeal behind them, the Urshels moved to San Antonio for the remainder of their lives. Paradise Texas would forever be associated with one of the most notorious bank robbers of all time.